What makes great car chases in movies and video games? The soundtrack.

This won’t be a very technical post (unless I mess it up), but more of an overview of the latest stupid thing I’ve been working on.

I’ve liked cars and driving sensibly since before I even got my license. After my talk at 34c3, I’ve been fooling around automotive related computer science and security as much as I could. Here, I will describe the longest project I have worked on since starting computer science (merely 5 years ago), which is a “drive controlled” infotainment system. What’s that ? Simply put, I always listen to music when I drive, and I unconsciously find myself matching my driving to the song currently playing. What I’ve wanted for the longest time was the opposite, an infotainment system that would match my driving.

Step one, lay the plan down

For this project, I wanted something easy to move from one car to another, as responsive as possible, with a nice display. I usually hate doing graphic stuff, but for this I might as well do something that integrates nicely with the car. The initial idea I had was a system implementing those characteristics:

Choosing the hardware and frameworks for this project was a real pain, and the first 4 weeks were mainly testing different ones until something seemed to work. I won’t dive into all of this, so let’s fast-forward to the first working version.

This was a very rough PoC. For the hardware, I used an Asus TinkerBoard running the official (mostly working) Debian TinkerOS. Discussing on the Asus forum helped me plug the PiCAN2 shield for CAN communications through OBD-II. The car I did most of my initial testing on was a 2013 Volkswagen Polo that supported CAN and OBD-II, allowing me to query information about the car (and thus my driving). The screen was a classic 7” Raspberry Pi touchscreen through HDMI/USB. For the software, I used python for all the core tasks (music through VLC bindings, python-can for CAN over OBD-II) and wxWidgets for the interface. To this day, this is still what I use since it works. The wxWidget interface and the python core communicate with each other through ZeroMQ. It’s not as pretty as could have been something with JUCE or even Kivy, but these were too laggy on the Tinkerboard, or didn’t support some features I wanted. The sound was transfered to the car’s speakers through the auxilliary mini-jack input. 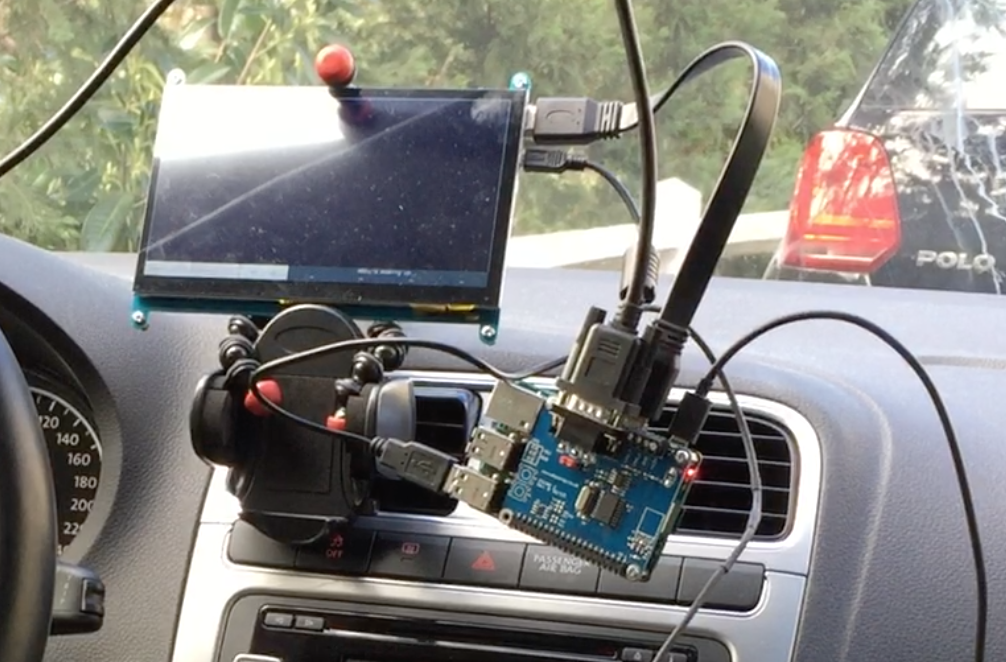 Step two, match the music and the driving

The first version was my initial vision of the project: the interface would play videos (the original audio tracks of the videos were removed) and musics depending on my sole speed. There were calm, relaxed songs and videos for idle and low-speed driving (under around 40 km/h), and more aggressive ones for higher speeds. While this was easy to implement (I just needed to look at the speed from OBD-II and change the media accordingly), this very quickly became unpleasant when test driving. At each stop light, the music would cut to something calm, then re-change when accelerating, which meant I was never able to listen to one song completely when driving in city streets. Another thing I expected would happen, but not to this extent, was the inconvenience generated by the video clips. In Japan, most cars have a screen in the center panel that allows drivers to watch baseball (for example) when waiting at the stop lights. But when the car starts running over a certain speed (~5/10km/h), the screen goes dark while the sound remains. Mine didn’t turn dark, and while this was very nice for passengers to pass time, it didn’t help the driver’s concentration. Here is an early clip of the interface:

I added the first voice effect for the “not AI but looks like an AI” co-pilot, as well as some “moods” that are different video+song playlists depending on what I wanted to listen (Girls Und Panzer OST, calm musics, driving musics, anime musics, retrowave, etc). I didn’t add any way to match a song and a video, so videos were quite generic for each songs of one specific mood. Below is an extract of my first test drives (note the rough setup) and testing. It was still quite buggy and full of experimental features, but at least it was taking form.

At this point (meaning, after fixing all the bugs I had by driving in circles on the highway interchanges), I had pretty much reached the initial goal I had fixed but was unhappy with the result. This was not very fun to drive with, and only allowed me to change playlists with videos I couldn’t (shouldn’t) even look at. Overall, I had the same result I would have by plugging my phone to the aux input, but way more complicated in every sense.

In fact, the music changing depending on the speed was not really what I needed. What I really needed for this project to become interesting, was what I then called the Now I'm pissed™ mode. Picture yourself driving behind a way-too-slow car on a montain road, when the once-in-a-lifetime opportunity of passing it finally occurs, or having to escape the bad guys you just spotted in your rear-mirror (you never know, ok ?). You go from third to second gear, and floor it. This very moment is when you need that music boost: the Now I'm pissed™ mode. This was very interesting to develop as I needed way more information about the car (accelerator pressure, RPM, speed, etc), as there were a lot of moments where this triggered when it shouldn’t have, but in the end it worked and completely replaced the previous modes. I also dropped the video interface to display analytics about the car instead. The Now I'm pissed™ mode - LVL2 is a small upgrade where the IVI only relies on the accelerator pedal to trigger the music. It’s way more aggressive but also way easier to trigger for track and racing.

Another detail worth noting is that I moved to Japan at this point and bought my own car. It’s an old Subaru Impreza that didn’t support CAN, and I thus needed to add a module to support its old Subaru Select Monitor v1 (SSM1) protocol. The project being mostly car independant, it was just a matter of overloading the base functions with SSM1-specific ones. All of this was however a pain to create as there was few to none information available, so most of it was done via reverse engineering. Also, as it didn’t support CAN, I had to replace the PiCAN2 shield with something else (Teensy 3.2, in the end). I won’t dive into that now, as this was part of my research work at WhiteMotion this year, and will probably be the subject of a future post/talk/whatever (UPDATE: here it is).

SSM1 works over a 1953 bauds serial link, so querying the data was waaaaay slower than CAN, which is why I couldn’t get data as accurate. But it’s still enough. 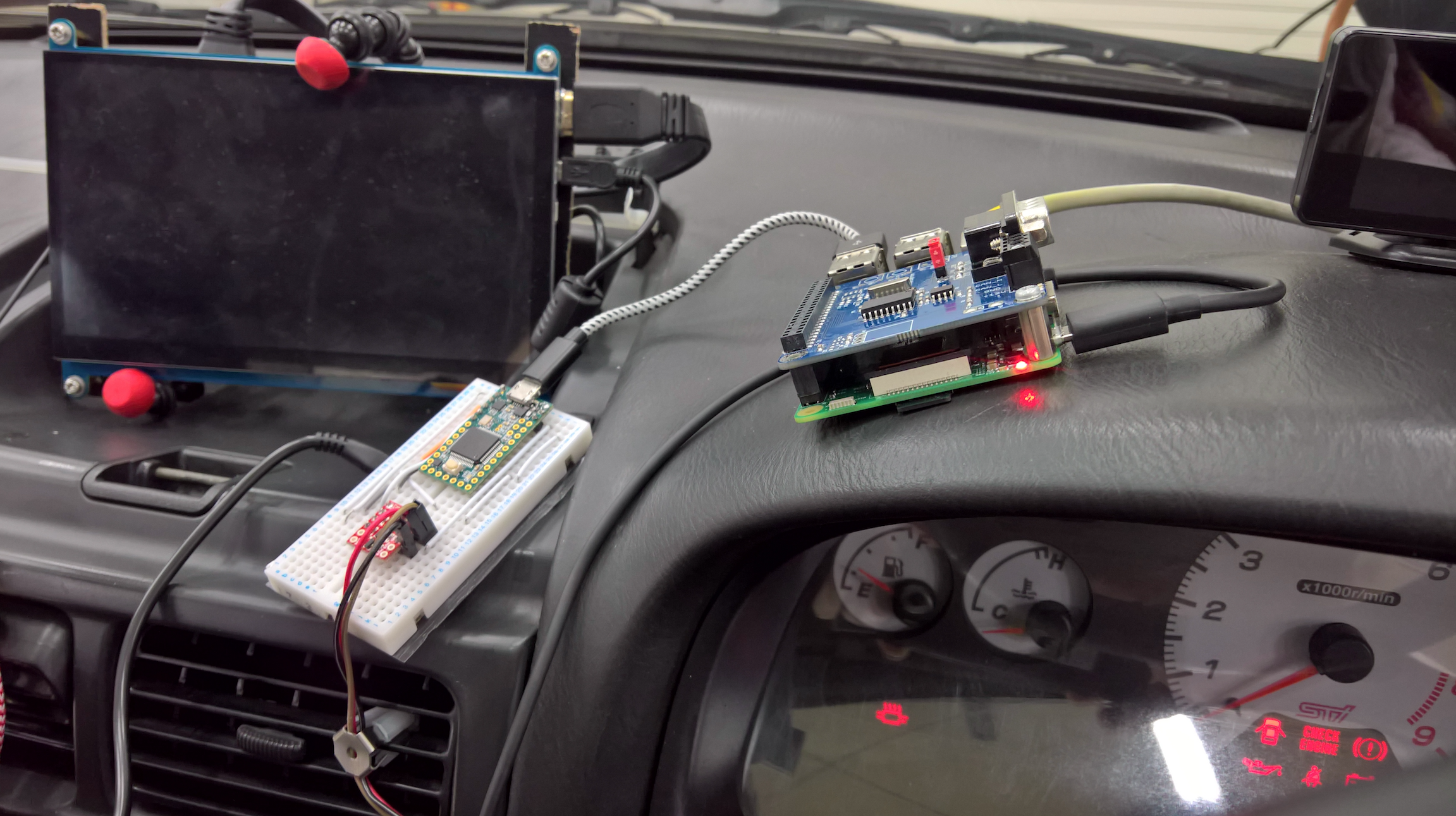 I had my own car, that I often drove on tracks like the Fuji Speedway, so I was willing to integrate the system to the central console as much as possible. The car was built in 1997, so the previous infotainment system was pretty obsolete. 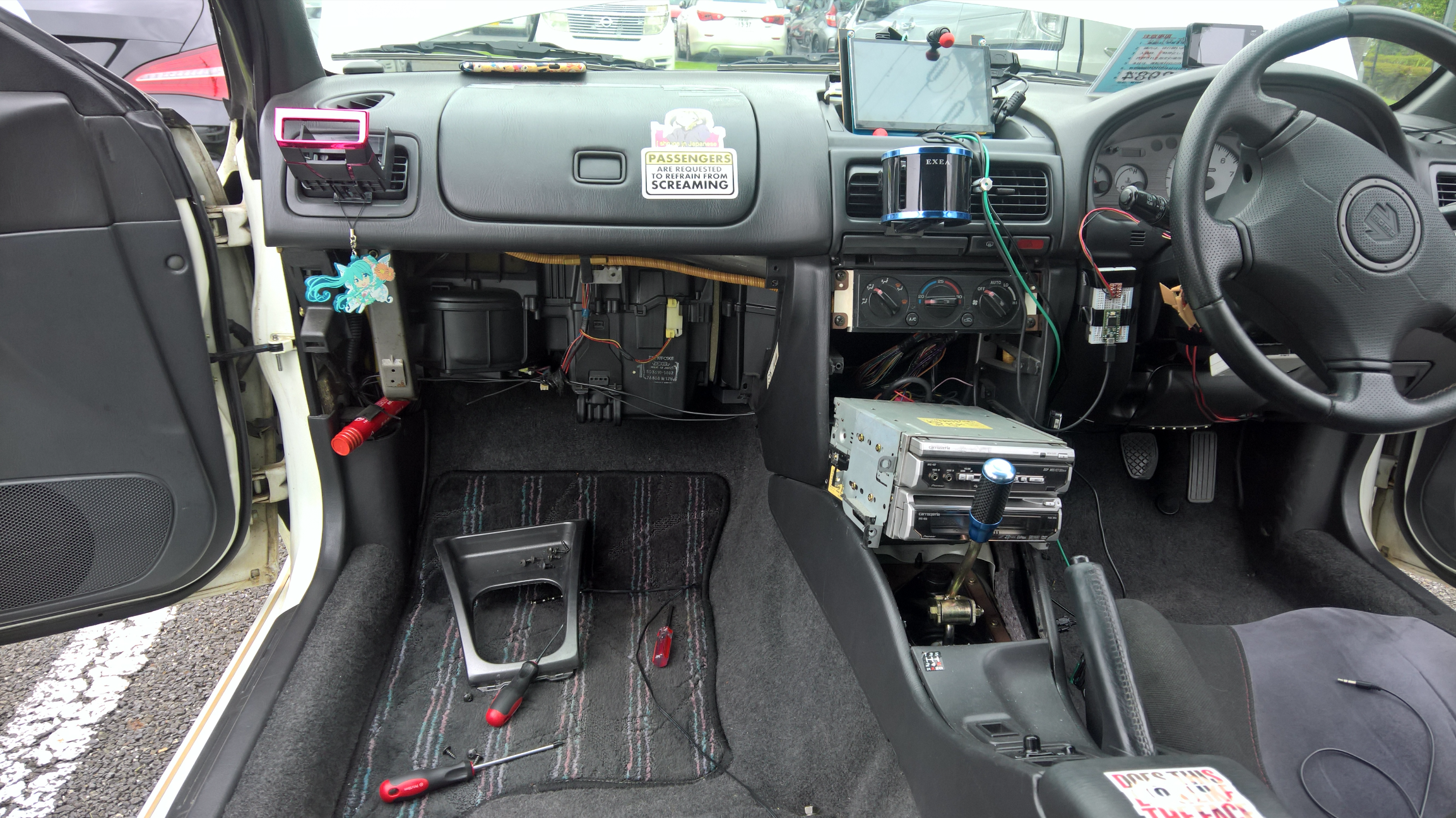 Fast-forward replacing the whole sound sytem of the car (I replaced the big old aftermarket stereo with a Pioneer GM-D14000II amplifier connected to the car’s speakers). I fixed some bugs, added features and removed annoying ones, and was able to get something ok-tier that fits my need. While not being perfect, it still works even on long trips (more than 5 hours) without overheating (summer in Tokyo is harsh), and is a great tool when going to the track. I added an option where the IVI will trigger an alarm if some values go wild like, temperature too high, RPM too low (happens sometimes on this car), and such. The gear displayed is not always accurate when shifting as the exact gear was not available from the ECU (UPDATE 2019: found it in RAM directly later). I thus used the fact that the RPM and speed’s relation is linear and each gear has a different ratio constant. So I just had to look at the transmission’s spec, find said constants and check to which of them the current rpm/speed ratio is the closest. 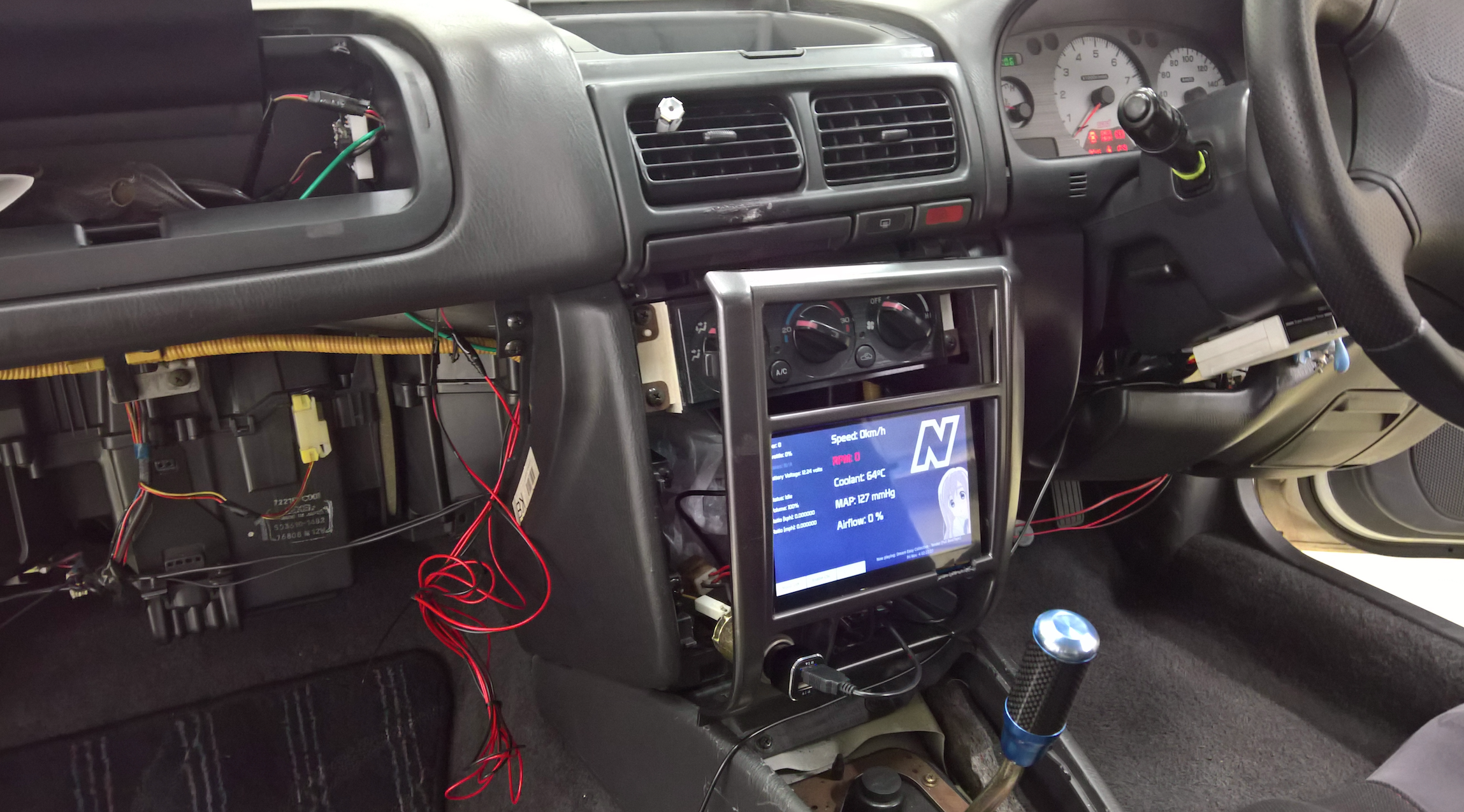 Demonstration 1, out of the car with data replay

For the little story, you can see I added a GIF of Mugi that blinks. While I’m very fond of it, this GIF actually serves a real purpose, which is almost the same as the CCC’s Maneki-neko: it allows me at a glance to verify that the interface didn’t freeze, even if the displayed data doesn’t change (when testing, the engine is not always running, so the data barely evolves for example).

The end result’s features are the following:

As surprising as it seems, this stupid project ended up useful when talking with other drivers about how to drive on the track, as they could actually see how and at which speed I was driving, how and when I shift, even when not being with me in the car.

I’m still looking for ways to add more functionnalities to this, but I lack ideas. Maybe add some position tracking to recreate tracks/roads that could become a cheap racing GPS (manually add which speeds to brake to when reaching each corner for example, like a rally copilot). (UPDATE: I did the GPS part for recreating tracks/roads in the end, but I haven’t found the time to actually write about it yet. Here is an example however).

I skipped an awful lot of details in this, as I don’t feel this has any technical interest, but I still wanted to showcase this project a bit. I’d like to create a second version on “real”, more robust hardware with more capabilities, powered as an accessory, but as for now, my car at least made its entrance into the 21th century. I hope you liked the overall project, feel free to tell me your remarks and ideas on Twitter, and thanks for reading!

(2018/12/29): Quick update. I received some comments stating that this would not help people driving any better, and just help them get angry. While this could be true, this project is only here to present the fact that you could have an infotainment system that evolves regarding the way you drive, in any way possible, not only the music (fuel economy, warning messages, seat position when cruising on the highway, cameras and sensors regarding whether you are in the streets or the mountains, etc). I’m not promoting speeding here, just showing up a programming project that could become the basis of software with real usages.

Wowowow hey, where is the code ?

I won’t release the code yet for multiple reasons, the first one being “omg I can’t let people see the magic”. I’m still working on it and it really is very unstable (I still work with copies of the SD card image, that I need to reflash a lot), so as long as I don’t deem it finished, I will keep cleaning and enhancing it. :)